You will not easily discover more trustworthy characters than these your neighbors, and I counsel you to hold fast to these men by every righteous means, and regard this as a duty of no secondary importance. Plato.  Letter 6.323a 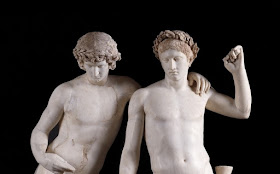 "The San Ildefonso Group was discovered in Rome in 1623 and arrived at the palace of La Granja de San Ildefonso one hundred years later. This work shows Orestes and Pylades, legendary models of friendship, offering a sacrifice after having returned to Tauris. This act purified Orestes, freeing him from his divine punishment. Other authors identified these statues as the brothers Castor and Pollux. In modern times, the Roman portrait of Antinuous was added to the left torso. A creation of Augustan classicism, this group of sculptures is a superb reflection of that period’s eclecticism. The earliest reference to this group dates from 1623 at the Villa Ludovisi in Rome, where it belonged to Cardinal Massimi. Following the Cardinal’s death, the piece became a part of the collections of Christine of Sweden. It then entered the collection of the first Bourbon king of Spain, Felipe V (1683-1746)." - Museo Del Prado.