Although scholars argue about whether Roman Mithraism arose in the 1st century BCE or the 1st century CE, Plutarch mentions the pirates of Cilicia were practicing secret rites of Mithras in 67 BCE. Plutarch says these pirates were especially active during the Mithridatic wars (between the Roman Republic and King Mithridates VI of Pontus) in which they supported the king. The association between Mithridates and the pirates is also mentioned by the ancient historian Appian. The 4th century commentary on Vergil by Servius says that Pompey settled some of these pirates in Calabria in southern Italy. However, the unique underground temples or mithraea appear suddenly in the archaeology in the last quarter of the 1st century CE.

The earliest monument showing Mithras slaying the bull thought to have been found in Rome bears an inscription that tells us it was dedicated by a certain Alcimus, steward of T. Claudius Livianus, commander of the Praetorian guard in 101 CE. The first important expansion of the mysteries in the Empire seems to have happened quite quickly, but not until late in the reign of Antoninus Pius (b. 121 CE, d. 161 CE) and under Marcus Aurelius.  Mithraism reached the apogee of its popularity during the 2nd and 3rd centuries in parallel with the worship of Sol Invictus. It was a religion of redemption and taught Mithras guided souls from their earthly life back to the light from which they issued upon their death. Mithraism survived until the late 4th to early 5th century CE when Christianity became strong enough to exterminate it by force supported by the anti-pagan decrees of the emperor Theodosius. 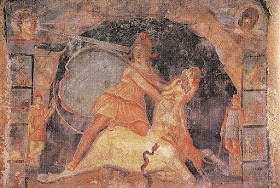 Image: Fresco of Mithras and the bull from the Temple of Mithras in Marino, Italy dated to the 2nd century CE courtesy of Wikimedia Commons.